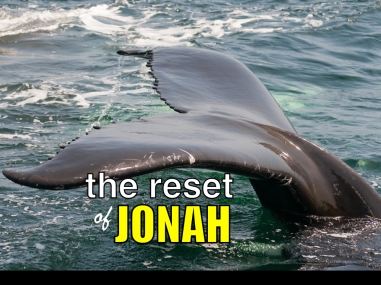 FIRST OF A SERIES

Over the next few weeks, we’re going to present the reset of Jonah.

So, let’s begin with this question, “Who is Jonah?”  A prophet (messenger of God) named Jonah lived in the eighth-century B.C. (before Christ).  He appears in the Bible in the book of 2 Kings to tell King Jeroboam II that the borders of Israel would be restored.

Then, we have the book of Jonah.  This is a book that has been the subject of great debate among academic types and there are many ways that people view the book of Jonah.  For some, this is a biographical account of Jonah the prophet and his experience.  For others, this book of Jonah is a parable — a story with a deeper God meaning.  No matter how you view it, this book can give us some incredible insights to God’s approach to the resets that we experience in our own lives.

1 The Lord’s word came to Jonah, Amittai’s son: 2 “Get up and go to Nineveh, that great city, and cry out against it, for their evil has come to my attention.”

3 So Jonah got up—to flee to Tarshish from the Lord! He went down to Joppa and found a ship headed for Tarshish. He paid the fare and went aboard to go with them to Tarshish, away from the Lord. 4 But the Lord hurled a great wind upon the sea, so that there was a great storm on the sea; the ship looked like it might be broken to pieces. 5 The sailors were terrified, and each one cried out to his god. They hurled the cargo that was in the ship into the sea to make it lighter.  – Jonah 1:1-5 (CEB)

When we first encounter Jonah, we find that he has a location issue.  He’s called by God to leave his current location (Israel) and go to the location God wants him to go (Nineveh) and deliver a message.  Jonah’s response?  He’s going to go in the opposite direction to a very different location (Tarshish).

Why would Jonah balk at being sent to Ninevah? Nineveh is the capital city of one of Israel’s greatest enemies.  In other words, Jonah is given the task of walking into the center of his nation’s most hated enemy to tell them that they are so evil that God is taking action.  I’d imagine that’s not going to make Jonah the most popular visitor in Nineveh.

If you need some perspective, think about the commands of Jesus.  Jesus tells us to love our neighbors and we can get to that.  But, the command to pray for our enemies?  That one’s a lot tougher to do.

So, God tells Jonah to “get up and go” and Jonah “got up” and flees the scene.

Maybe Jonah’s response says something to us when we face our own reset situations in life.  Have you ever known that you had to face a tough situation, but you purposely chose to go in an opposite direction just to avoid it?  I’ve heard a phrase used in working with organizations that goes something like this, “Choose the hill you want to die on.”  In other words, that advice says to not confront the issues that just won’t matter in the end.

Many reset moments are found when we try running from situations that we know we need to face.  The same is going to be true for Jonah.

Jonah’s response leads to the first reset in his story.

Because Jonah chose to run, he now brings others into the story.  A group of sailors on the ship find themselves in the middle of a storm.  Sometimes our running causes all kinds of storms in our life and so many others are pulled into the storm’s path.  The passage for today ends with the sailors praying to their gods for relief.

Have you ever decided to run from something?  Maybe you didn’t want to do what you felt God needed you to do. Maybe you were afraid.  You ran away and in your running, you brought others into the story.  Maybe as we start to think about Jonah, we can begin by remembering the times we have rebelled and run in the opposite direction.

Today’s reset truth: Many times, we choose, at least initially, to run from our resets.

ReigniteMyStory.com is based on the ideas that we reignite our life stories when we reset them, renew them and redeem them.  Contact the site at reignitemystory@gmail.com or follow on Twitter at @reignitemystory