When the misfits show up for Christmas

Posted on December 13, 2016 by reignitemystory 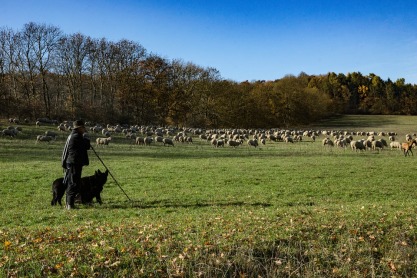 Shepherds were considered to be misfits in the time of Jesus.  Yet, Christmas opens the door for misfits to be a part of the Kingdom of God.

The word “deplorable” is one of those words.  I’m not writing this as a political statement.  I’m just borrowing these words to describe the public sentiment for shepherds in the First Century.

Many people saw the shepherds as deplorable.  Shepherds were loners, outsiders and misfits.  They were dirty, smelled like sheep and were considered by the religious crowd to be unclean and unholy.

Some believed that the shepherds were rogues and criminals. They were viewed as so deplorable and so untrustworthy that there were not allowed to be witnesses in a trial.  Jokes would’ve been made about how you could tell a shepherd was lying when his lips were moving. In other words, no one believed a word they said.

Yet, the shepherds, those who were at the bottom of the social ladder, were the first outside of the immediate family to hear the good news that Jesus had been born.

And, many who lived in the day of the shepherds would be puzzled as to why God would reveal something so big and earth-shattering to a bunch of lowlife shepherds. It just didn’t make sense.

That’s why this part of the Christmas story is so important.  It is the part where God invited the broken, the outsider, the misfit, etc., to become a part of what God is doing in this world.

To see how that happens, we pick up the story of the shepherds in Luke 2:8-20.  Here’s how that goes:

8 And there were shepherds living out in the fields nearby, keeping watch over their flocks at night.

Shepherds lived in the fields with their sheep.  Imagine how they must’ve looked and smelled.  Nearly everyone would have thought it peculiar that God was choosing the group to be a part of the Kingdom of God.

9 An angel of the Lord appeared to them, and the glory of the Lord shone around them, and they were terrified. 10 But the angel said to them, “Do not be afraid. I bring you good news that will cause great joy for all the people. 11 Today in the town of David a Savior has been born to you; he is the Messiah, the Lord. 12 This will be a sign to you: You will find a baby wrapped in cloths and lying in a manger.”

Angels must be scary since they always lead with “don’t be afraid.” In this case, the angels are bringing good news about the birth of the messiah.  Remember, gospel means “good news.” The angels tells the shepherds that, as a part of this good news, they will see a “sign” and it is the baby in the manger.  This is an absolute miracle.

13 Suddenly a great company of the heavenly host appeared with the angel, praising God and saying,  14 “Glory to God in the highest heaven, and on earth peace to those on whom his favor rests.” 15 When the angels had left them and gone into heaven, the shepherds said to one another, “Let’s go to Bethlehem and see this thing that has happened, which the Lord has told us about.”

The angels are so excited that they hold a worship service and the shepherds get the message:  Go and see the messiah!

16 So they hurried off and found Mary and Joseph, and the baby, who was lying in the manger. 17 When they had seen him, they spread the word concerning what had been told them about this child, 18 and all who heard it were amazed at what the shepherds said to them. 19 But Mary treasured up all these things and pondered them in her heart. 20 The shepherds returned, glorifying and praising God for all the things they had heard and seen, which were just as they had been told.

The shepherds heard the angels’ invitation and,  probably, left their sheep behind in the field.  They were so impressed with the message from the angels that they had to tell everyone — even if the people would not believe a word they said.  The shepherds go out and spread the “good news” (making them the first evangelists) and then they come back to worship Jesus again.

So, how can we take a passage of scripture such as this and sum it up?  Maybe we can do it this way: Jesus opens the door to misfits.

Now, what does this idea of Jesus opening the door to misfits mean for us?

Second, the shepherds represent all of us who have a problem we can’t solve. Remember, the shepherds were thought of as the lowest of the low.  They were, by the religious definition of the time, unclean, unholy and “sinners.” It was a problem they could not solve.  Nothing they did on their own was going to raise their standing in society and pull them out of the bottom rung.  They were shepherds for life.

Yet, the angel presents them with the reality of a messiah – with the chance to solve their “unsolvable” problem. When they are faced with the option of staying where they are or going to meet the savior, the shepherds choose to walk off the job and find Jesus.

It all starts with the realization that you can’t fix it on your own, that you have an option. Which option do you choose?  The red pill or the blue pill?

Choose with confidence because Jesus opens the door to misfits.

Lastly, Jesus is the answer.  The outsider and misfit shepherds realize that the only answer to their problem and future condition rests in this child in the manger.  Their decision to go and see Jesus creates an interesting chain of events.  The misfits get the invitation to see the messiah.  They see him, they worship him and then they have to go and tell others about it.  Maybe, they went to find other misfits just like themselves.  Then, they return and worship Jesus again.  Why?  Because, Jesus opens the door to misfits.

What does the story of the shepherds say about the Kingdom of God and its view about outsiders and misfits?

Maybe that view can be summed up this way:

In other words, the Kingdom of God is created and opened wide for broken, deplorable misfits.

Maybe, that’s why I find myself connected to the story of the shepherds.  It’s easy to be hurt by others, by the church, by your own decisions and choices.  It’s easy to carry anger, grief and pain and withdraw from others.  Maybe you’ve even felt it or been there.  I understand that hurt.

And, it’s easy to feel like a broken misfit when it comes to God and the church.  Maybe, you are carrying those wounds, scars, pain and brokenness right now.  But find hope, because this story is for you.

The Shepherds show us that there is still a place in the Kingdom of God for misfits.  Jesus always invites the weary, the broken, the hurting, the outcast, the stranger, etc., to experience what it means to know the messiah.

Then, Jesus always invites those broken, hurting misfits to go into a deeper relationship, to experience life change and transformation.  It is an invitation to learn to hope again.

That’s the bottom line of Christmas:  Jesus opens the door to misfits.  And that door is wide enough for all of the misfits just like us.

When the shepherds show up in the nativity scene, they bust open the doors of the kingdom to all of us.  They show us that the God who invites shepherds is surely inviting us.

So, will you accept the invitation and come to see the Christ child?

ReigniteMyStory.com is based on the idea that every life story can be reignited when we reset it, renew it and redeem it.  You can contact me with ideas, questions or suggestions at reignitemystory@gmail.com or by following me on Twitter at @reignitemystory.